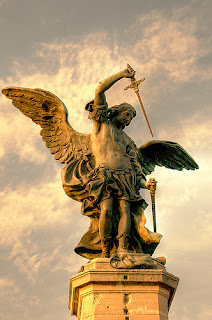 Everlasting God,
You wonderfully ordered
the ministries of angels and mortals,
and sent the archangel Michael,
bearer of the banner of heaven,
to defend us against
the malice of Satan’s pride.
Do not forsake us in the last struggle with evil,
but by the aid of Your holy angels
bring us to eternal life,
through Christ our Lord.  Amen.

How is your family planning to celebrate? There are a wealth of traditional foods for the celebration of the Archangel Michael. As this post explains, carrots, goose, special bread (St. Michael's Bannock) and blackberries are all on the traditional menu, for various reasons. Or waffles are, apparently, traditional in France; this website has a recipe and additional info. Other edible ideas I've seen include angel-shaped sugar cookies or really anything autumnal, since Michaelmas - almost exactly midway between Midsummer (St. John's Day) and Christmas - is the traditional approximation of the equinox and thus the beginning of autumn. If you're looking for decoration, aster flowers are also known as Michaelmas Daisies, because in many places they bloom around the feast.
by Aaron Linderman at 1:36 AM No comments: Links to this post

Teaching Medieval History: How Should We Do It Today? 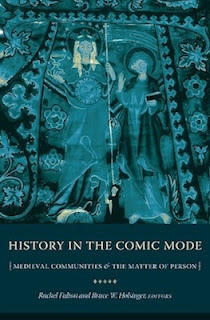 In an age when controversies and commentary happen at the speed of Twitter, I do not profess to have kept up with all the twists and turns in the saga of Rachel Fulton Brown, a medievalist at the University of Chicago. But, so far as I can tell, the story went something like this: A couple years ago Prof. Brown wrote a blog post noting that medieval white men had done some good. In light of recent white supremacist shenanigans, another medievalist left a comment on this old blog post, essentially asking Prof. Brown what she was doing to set the record straight and fight racism. Prof. Brown took issue with this perceived politicization and the whole thing descended from there.

There are three questions (possibly more) at issue here: How do we teach medieval history? How do we interact as professional historians? And how should history be employed to political ends?

I am currently teaching medieval history to high school students (specifically, a British history survey; the first semester is medieval, the second modern). My basic approach is to point out some of the good things going on - we discuss literary achievements, religious life, and the role of women such as Etheldreda and Leoba - while also acknowledging the shortcomings in justice, knowledge, and material standards of living. So far as I can tell, Prof. Brown has taken a similar approach. She has not claimed that medieval Europe was a paradise, but neither is she willing to suggest - as some in academia do - that the thousand years of medieval history are one long record of unbroken oppression. Likewise, she has not claimed that European or Western civilization is, in every respect, superior to all other cultures of the world; but neither has she characterized Western civilization as inherently bad. One may quibble with some details, but her overall approach is very sound history; to deviate from it would be a shame.

In lashing out at her critics, Prof. Brown has not always used kind or professional language. For that, she deserves a stern talking to from her department head. But calling for her job is a bit much. Her opponents should know that you cannot publicly criticize someone without expecting them to respond, possibly disproportionately, possibly in an unprofessional manner. This is unfortunate but not the end of the world.

But the crux of the controversy seems to be the role of history in contemporary debates. Some people argue that there is an imperative duty for all academics to wield their professional tools in a partisan manner; their central task, the argument goes, is to fight injustice. The error here is not in presuming that academics can weigh in on current debates. Rather, the error is two-fold: presuming that academics must engage in such debates and failing to appreciate the deep long-term contributions of academia to the cause of justice, without mentioning contemporary issues. Teaching students how to reason; how to think deeply about culture, politics, and religion; teaching them to express themselves clearly in speech and in writing - these are profound contributions to the common life of our country. Indeed, I would argue that over emphasis on the latest subject of protest risks undermining the very important work of fostering these necessary habits of thought.

So far as I can tell, Prof. Brown shares the my understanding of the role of history. She has not, to my knowledge, insisted that academics avoid all discussion of current controversies or politics; rather, she simply asks that her non-participation in such crusades not be held against her while she is busy carrying out these other essential tasks of history. I hope, for everyone's sake, this tempest ends soon so that we can stop the comment wars and get back to more important work.
by Aaron Linderman at 4:58 AM No comments: Links to this post

This song needs no preface.

by Aaron Linderman at 9:13 AM No comments: Links to this post

Inspired by recent events here in Charlottesville and by this article by Marc Barnes, I've been convinced ever more of humanity's need for God's mercy and, consequently, of the need to pray for it. As a result, three prayers have been on my lips more often of late.

The first is an ancient prayer popular among Orthodox Christians. It comes in a few minor variations and is often referred to as the Jesus Prayer:


Lord Jesus Christ, Son of the living God, have mercy on me, a sinner.

The second is a prayer revealed to St. Faustina, typically prayed as part of the Chaplet of Divine Mercy, and again quite simple:


For the sake of the sorrowful Passion, have mercy on us, and on the whole world.

The final prayer for mercy comes from Fatima, and against reflects the them of praying for ourselves and others:


O my Jesus, forgive us our sins, save us from the fires of hell, lead all souls to Heaven, especially those most in need of Thy mercy.

These are prayers you can easily insert into your day.  Please pray them, often.  Look around - we need them.
by Aaron Linderman at 4:14 PM No comments: Links to this post