I understand the sentiments behind flying the Confederate Battle Flag (or, at least some of them). People are fed up with excessive federal government and want to see the states empowered again. They're tired of a declining sense of heritage and local community. They're tired of being told by people they have never seen what they can and cannot do.

But in spite of this sympathy, I have grave doubts about the wisdom of flying the Confederate Battle Flag (more specifically the Battle Flag of the Army of Northern Virginia). This flag was carried by men engaged in rebellion against the United States - arguably the largest and bloodiest act of treason in American history - in defense of a would-be state that advocated slavery as a positive good and a "corner-stone" of its system.

Admittedly, for most people who fly the flag, it doesn't stand for those things. To them, it stands for home, heritage, freedom, and courage. Rather than getting sucked into the question of what the flag "actually represents," let us admit that different people view it differently. And it is doubtful whether it is prudent to elevate symbols which we know people will misconstrue.

Fortunately, there are a raft of alternative flags available to the historically-conscious individual who wishes to express the positive sentiments behind the Confederate Battle Flag while avoiding most of its negative connotations. The fact that many of these flags are today obscure may actually be a virtue, leading neighbors and passers-by to ask what the flag means, allowing the person flying it to explain.

Other Flags of the Confederacy

This is my least favorite option, since much of the negative connotation remains, but it merits mention. Why not fly one of the political flags of the Confederacy, particularly the First National Flag? This could be taken as a symbol of the hope (however naive or stillborn) that the Confederacy might peacefully secede and become its own nation. The battle flag is, in some sense, an admission that attempts at peaceful secession were a failure.

Every state has a flag, and several - particularly North and South Carolina (pictured left) - are not unattractive. (There is, however, still the problem that the Mississippi state flag incorporates the Confederate Battle Flag.) There's no requirement that state flags be flown in conjunction with the US flag. Moreover, it is not a breach of flag protocol to fly a state flag on an adjacent pole at the same height as the US flag.

There is a wealth of possibilities here. If you think your current state flag is boring, Alabama, Florida, Georgia, Louisiana, Mississippi, North Carolina, South Carolina, and Texas have earlier flags you could consider flying, to indicate loyalty to both place and history. (Though admittedly, Florida's past state flags are so ugly you probably wouldn't want to try those.) As it turns out, the current Mississippi state flag, with the Confederate Battle Flag in the canton, was never used in Confederate days; during secession, the Magnolia Flag (pictured right) was used. 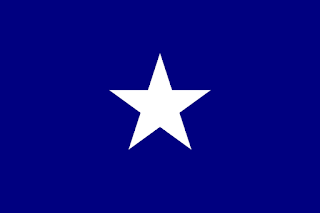 One particularly notable flag of yesteryear is the Bonnie Blue Flag (pictured left). First used by the short-lived Republic of West Florida (which encompassed parts of modern-day Florida, Alabama, Mississippi, and Louisiana), a version of the flag - sometimes with the original white star, sometimes with a gold star - was later adopted by the Republic of Texas, possibly because its original goal, like of that of the Republic of West Florida, was to be annexed by the US. The flag was used by Mississippi when it seceded in 1861 and was later incorporated into the Magnolia Flag. The Bonnie Blue Flag was likewise used across the Confederacy. Thus, this flag, elegant in its simplicity, can represent several states across the South and, while speaking to the region's Confederate heritage, also speaks to events outside that period.

Other historical flags include the aptly named Come and Take It Flag from Texas's republican days or the Alamo Flag (though its clear connection to the Mexican flag may not sit well with some nativists).

Some states also have flags from their colonial days, such as the old flag of French Louisiana (right, above). Those with an interest in ships might also be drawn to the South Carolina ensign (right below), used not only during secession but also during the American Revolution.

The history of the United States offers even more options.  The Gadsden Flag (left above), with its iconic "Don't Tread on Me," was first used during the American Revolution (and is available on license plates in Virginia, maybe elsewhere too).  The
Bunker Hill Flag also harkens back to America's earliest days.  And the Fremont Flag (left below), carried by John C. Fremont on his expedition, may be taken as a symbol of the American West and its rugged individualism.

Religion is a key part of many people's traditional heritage, and there are several religious flags to choose from, be you Catholic, Episcopalian, or Christian writ large.  Moreover, flying a religious flag may be seen as an expression for First Amendment rights against an overweening federal government.

At first glance, a foreign flag might seem an odd choice for someone wishing to show patriotism and a connection to a local place in the US. But there are two reasons why this might work. First, most Americans are descended from immigrants from elsewhere. Why not fly a Scottish, Irish, or German flag? Moreover, if you're interested in standing up for liberty, there are several notable groups overseas who have done just that. I am particularly drawn to resistance movements that opposed the Nazis. Why not fly a flag of the Free French (above left), the Polish Home Army (center left), or the flag proposed by members of the July 20 plot who sought to topple Hitler in Operation Valkyrie (bottom left)? Plenty of true heroes to emulate and celebrate there.
by Aaron Linderman at 5:12 PM No comments: Links to this post

Over at Laudato Si' Excerpted I'll be posting passages from the encyclical by Pope Francis several times a week for the next few months. Below is the introduction to the first installment.

When Pope Francis's encyclical letter Laudato Si' came out, I was a bit befuddled by the media coverage, which claimed that the pope had suddenly become an environmentalist, and also wrote about the poor, with a sprinkling of traditional Catholic condemnations of things like artificial birth control.  Frankly, it sounded like a pretty schizophrenic document (which, in any case, I didn't have time to read).

But I was again reminded of Laudato Si' when I came across a Financial Times article about Yellowstone that asked, "Are humans part of nature, or above it?  Why do we care about setting aside 'wild' lands such as Yellowstone?  Why do we care about the survival of wolves in the first place?  Does nature and wildlife have intrinsic value?"  So I picked up the document and was pleased to discover both insight and coherence.

You can read the first set of excerpts at Laudato Si' Excerpted.

by Aaron Linderman at 1:47 PM No comments: Links to this post