Tomorrow is the birthday of Friedrich von Steuben, a German aristocrat and soldier who came to the infant United States to assist in the War of Independence.

Friedrich Wilhelm Ludolf Gerhard Augustin von Steuben was born in Magdeburg, Prussia in 1730. Young Friedrich's father fought on behalf of the Tsarina of Russia, and therefore the son spent several years there.  He was later educated by Jesuits and served on his first campaign with his father at the age of 14.  He rose through the ranks of the Royal Prussian Army and became aide-de-camp (personal assistant) to King Friedrich the Great.  In 1771 von Steuben was made a baron.  Having suffered from debt, military politics, and unproven accusations of illicit relations for more than a decade, he came to America in 1777 to offer his services. 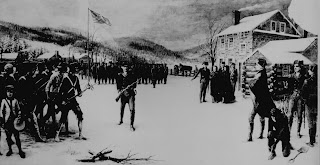 Von Steuben was named inspector general of the young Continental Army and brought a professional's eye to sanitation, record-keeping, procurement, and military drill.  Initially lacking command of the English language, he wrote his orders in French and had them translated.  He was attached to the headquarters of George Washington and Nathanel Greene and commanded a division in the Yorktown campaign.  After the war he oversaw the founding of the Society of the Cincinnati and became an elder of the German Reformed Church.

Although German-Americans are the largest ethnic group in the country, Von Steuben Day (observed on various days by locality) is less well known than such holidays as St. Patrick's Day, Marti Gras, and Cinco de Mayo.  Nevertheless, there are annual parades in his honor - and in honor of America's German-American heritage - in New York, Chicago, and Philadelphia.  Numerous cities and counties have been named in his honor, including Steubenville, Ohio and, by extension, the Franciscan University of Steubenville.  He is also honored, alongside three other foreign volunteers, with a statue in Lafayette Square, just north of the White House.

Notably, the Steuben Society, an educational, fraternal, and patriotic organization of German-Americans, was created and named in his honor in 1919, in the aftermath of World War I and the anti-German sentiment it engendered.  This is not just a matter of history; my family's local church, part of the Evangelical denomination, was vandalized during the war for the simple reason that the inscription over the door was in German.  The creation of the Steuben Society is both a warning of the dangers of nativism and a reminder of America's diverse immigrant population from the country's earliest days.

Tomorrow, in honor of Friedrich von Steuben, our family will be flying our new German flag.

Today's image comes from the National War College, via Wikipedia.
by Aaron Linderman at 5:58 AM No comments: Links to this post