MLK on the Treatment of Opponents 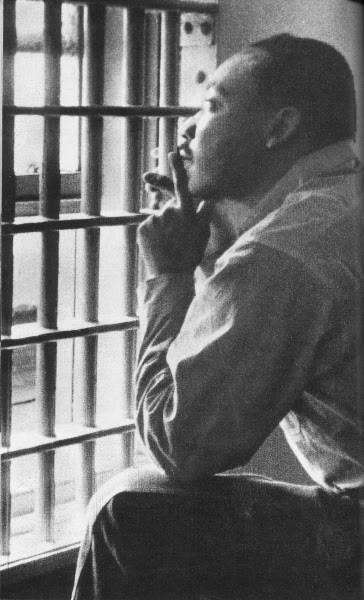 Last week one of my bosses encouraged all of his subordinates to read Martin Luther King Jr.'s "Letter from Birmingham Jail" today.  I would encourage everyone to do the same.  (Yes, even if you were one of my US history students.  Read it again.)  The letter is an exemplary work for a variety of reasons.  It is a model of rhetoric, of political philosophy, and of Christian thinking.  It engages with the Old and New Testaments, St. Augustine, the British legal tradition, the American political tradition, current European history, Martin Luther,John Bunyan, and the Jewish philosopher Martin Buber, to name a few.  But today I would like to highlight the way King characterizes his opponents.

Here is the context: King has come to Birmingham at the invitation of local campaigners to fight the system of segregation there, a particularly egregious case.  Having been jailed for his non-violent campaigning, King was criticized in an open letter by eight white pastors in the area, who accused him of being an outsider and asked that peace and order be maintained.  "We are convinced that these demonstrations are unwise and untimely," they wrote.

King responded with a resounding defense of why he was in Birmingham and why the campaign and its methods were justified.  But rather than reviling his critics as racists, cowards, or pawns of an unjust system, he called them his "Christian and Jewish brothers."  King explained, "Seldom do I pause to answer criticism of my work and ideas....  But since I feel that you are men of genuine good will and that your criticisms are sincerely set forth, I want to try to answer your statement in what I hope will be patient and reasonable terms."  He went on to agree with his critics when possible.  "You are quite right in calling for negotiation....  You express a great deal of anxiety over our willingness to break laws. This is certainly a legitimate concern."  And he applauded their past efforts, though more limited than his own: "I am not unmindful of the fact that each of you has taken some significant stands on this issue."  And he wished them all well: "I hope this letter finds you strong in the faith. I also hope that circumstances will soon make it possible for me to meet each of you, not as an integrationist or a civil-rights leader but as a fellow clergyman and a Christian brother."

Perhaps most strikingly, he considered the possibility that his analysis might be wrong: "If I have said anything in this letter that overstates the truth and indicates an unreasonable impatience, I beg you to forgive me. If I have said anything that understates the truth and indicates my having a patience that allows me to settle for anything less than brotherhood, I beg God to forgive me."

In our own day of bitter ideological divides, calls for bipartisanship are many.  But I think they may, sometimes, miss a larger point which King implicitly makes.  He extends the hand of peace to his critics because he genuinely believes in brotherhood, not compromise for its own sake.  He does not call for a lukewarm moderation - indeed, he criticizes lukewarmness - but recognizes something inherent in all men, a dignity which demands that even when he disagrees, he need not be disagreeable.
by Aaron Linderman at 5:04 AM No comments: Links to this post

Below is the text of a letter I sent to the Catholic Virginian, in response to a letter about Pope Francis' comments on capitalism.  The first letter was fair enough as a defense of capitalism against central planning, but made no reference to Catholic teaching on the matter.

In his apostolic exhortation Evangelii Gaudium, he notes that "the current financial crisis... originated in a profound human crisis: the denial of the primacy of the human person!  We have created new idols."  He warns us of "ideologies which defend the absolute autonomy of the marketplace.... They reject the right of states, charged with vigilance for the common good, to exercise any form of control. A new tyranny is thus born."

John Paul II, in his encyclical Centesimus Annus, asked, "Is [capitalism] the model which ought to be proposed?"  He explains: "The answer is obviously complex. If by 'capitalism' is meant an economic system which recognizes the fundamental and positive role of business, the market, private property and the resulting responsibility for the means of production, as well as free human creativity in the economic sector, then the answer is certainly in the affirmative.... But if by 'capitalism' is meant a system in which freedom in the economic sector is not circumscribed within a strong juridical framework which places it at the service of human freedom in its totality, and which sees it as a particular aspect of that freedom, the core of which is ethical and religious, then the reply is certainly negative."

This distinction is subtle but essential: the Church affirms a free market economy as a means of meeting human needs which accords with the dignity, autonomy, and responsibility of the individual.  But the Church also insists that the economy must be subordinate to the moral law and that profit must never become an idol, something of greater importance than God or our fellow man.

Pope Francis simply follows the Second Vatican Council, which observed that "man is the source, the center, and the purpose of all economic and social life."  The Council warned that "whatever insults human dignity, such as subhuman living conditions... as well as disgraceful working conditions, where men are treated as mere tools for profit, rather than as free and responsible persons; all these things and others of their like are infamies indeed."  Likewise, the Catechism anticipates Pope Francis' critique: "A theory that makes profit the exclusive norm and ultimate end of economic activity is morally unacceptable.  The disordered desire for money cannot but produce perverse effects."  Or, as our Lord Himself succinctly put it: "You cannot serve God and mammon."

Two final caveats may be in order.  First, I initially intended to include mention of Leo XIII and Rerum Novarum, but figured the letter was already long enough and most contemporary Catholics would ask, "Leo who?"  Second, I have not read Evangelii Gaudium in its entirety, nor do I profess to be knowledgeable of  all Pope Francis' writings and deeds regarding all topics.  But I am struck by how often both his critics and supporters paint him as novel, while on this - and a handful of other topics about which I know a little - he is well rooted in the tradition.  The pope, Catholic?  Who would have guessed?
by Aaron Linderman at 12:11 PM No comments: Links to this post